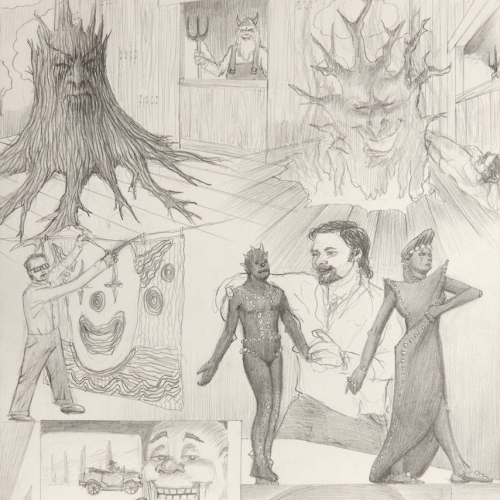 The exhibition presents new works by Los Angeles-based artist Jim Shaw (b. 1952, Midland, MI), marking his second solo with the gallery. A veteran of nearly 40 years in the field of art, the artist received his BA from the University of Michigan, Ann Arbor and his MFA from the California Institute of the Arts, Santa Clarita. His work has been shown extensively internationally and has been the subject of numerous solo exhibitions, including major surveys at the Marciano Art Foundation in Los Angeles, New Museum in New York, Massachusetts Museum of Contemporary Art, Chalet Society in Paris and many others, as well as featured in prominent public and private collections, such as the Museum of Modern Art in New York, Solomon R. Guggenheim Museum in New York, Los Angeles County Museum of Art, and the Walker Art Center in Minneapolis. In 2013 his work was included in the show “The Encyclopedic Palace” at the 55th Venice Biennale.