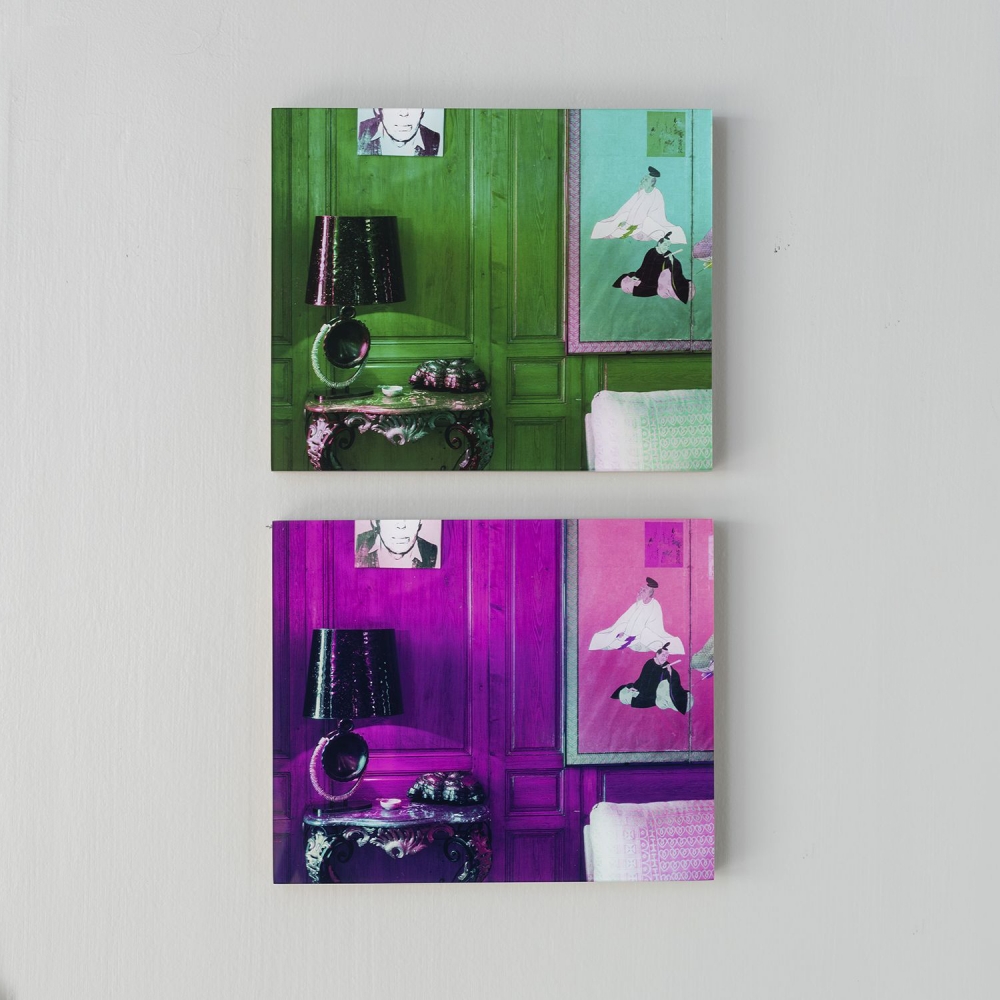 Marc Jancou Contemporary is pleased to present Is Anybody Home, an exhibition of new works by American artist Louise Lawler, as part of its OFFSITE: CHALET series. The exhibition, on view June 3-August 4, 2019, by appointment in Rossinière, Switzerland, will preview fifteen works from Lawler’s Three Sizes in Twelve Colors (1994/2019) series, alongside Fixed Intervals (1988-92), a collaborative work by Lawler and Allan McCollum.

Since the 1970s, Louise Lawler has been making photographs that depict artworks in their everyday environments, removing the emphasis from the art object itself and focusing on the vantage points, framing devices, and sites of display that affect the reception of an artwork.

The photograph in Is Anybody Home is derived from Lawler’s 1994 work It Could Be Elvis. Lawler has returned to this image numerous times, reprinting it in black-and-white, creating a tracing of it, and now, for this exhibition, producing an edition that digitally moves the single image through twelve hue shifts covering the full color spectrum at three different sizes. This re-appropriation of her own work is an integral aspect of Lawler’s approach to art-making and highlights the fluid nature of an artwork’s meaning over time. As Ann Goldstein has noted, “Lawler’s photographs emphasize that all artworks are continually restaged in the present; their meaning is not fixed within the object but open to the circumstances and readings at the moment of reception by a spectator.”

The edition Fixed Intervals was jointly conceived by Lawler and McCollum and consists of a series of graphic symbols produced in polished brass. When installed, Fixed Intervals act as stand-ins for artworks that have been removed from display for one reason or another. Directing attention from artworks to questions of display and functionality, with Fixed Intervals the artists “are pleased to present something for sale in the gallery that may be used.”

Louise Lawler was born in Bronxville, New York, in 1947 and works and lives in New York City. in 2017 she was the subject of a one-person exhibition, WHY PICTURES NOW, at the Museum of Modern Art, New York. She has had additional one-person exhibitions at Museum Ludwig, Cologne; Wexner Center for the Arts, Columbus, Ohio; Dia:Beacon, New York; and Museum for Gugenwartskunst, Basel